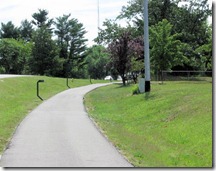 The Cadiz Railroad was completed just after the turn of the twentieth century. The railroad was a spur off the Illinois Central Gulf Railroad in nearby Gracey, Kentucky; however, the line was abandoned around 1990. Since then, the tracks have been removed from Gracey to Cadiz, and all that now remains is the old Cadiz Railroad locomotive and tracks just west of Interstate 24 on U.S. Highway 68. The Illinois Central Gulf Railroad still passes through the northeastern part of Trigg County; however, it does not service Cadiz.

The Cadiz Railroad was not a vast trans-continental network, but a small railroad company that operated over 10.33 miles of track between Cadiz and Gracey. Across the tobacco fields and grazing lands, Gracey is 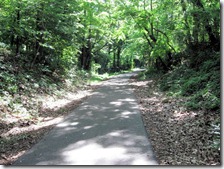 no more than eight miles from the Trigg county seat; but back in 1901 when the line was organized, a company had to possess more than ten miles of track to be classified officially as a railroad. Therefore, William C. White, the founder, constructed two extra miles of curves to push the line over the ten-mile-long minimum. He didn’t want anyone to say that Cadiz didn’t have a railroad.

The Cadiz Railroad made its last run in 1988. Stanley White, the grandson of the railroad’s first president,  donated the right-of-way to the Trigg County government for the construction of a recreation trail. The trail was dedicated in 1989, making it the first rail trail in the history of Kentucky. 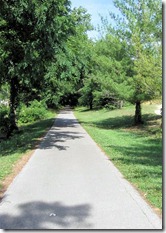 The Cadiz Railroad Trail is one of 1600 rail trails supported by Rails-to-Trails Conservancy, a nonprofit organization that is working to create a nationwide network of trails from former rail lines and connecting corridors.

The Cadiz Railroad Trail runs for 2.5 miles between an old railroad depot on state Highway 139 and Fortner Drive at the east end of town. The trail parallels Noel Drive and Lafayette Street, following an old corridor of the Cadiz Railroad. The surface is asphalt, and it is used for hiking, jogging, bicycling, rollerblading, and skateboarding. A good five-mile hike can be obtained by walking the trail in both directions. Most of the trail passes through  neighborhoods; however, the east section is surrounded by a small stretch of farmland, and the western part passes through a secluded tunnel of trees and follows a deep ravine. 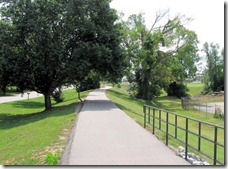 The Cadiz Railroad Trail does not offer tall mountains, massive bluffs or the seclusion of a lush forest; however, you will come away from a long hike feeling relaxed and like you achieved a good workout. Midway through your walk you may wish to check out the local sights and culture of downtown Cadiz, or perhaps browse through one of the numerous antique shops. While walking on the trail, please be respectful of the many trailside homes and businesses; and remember to “take only pictures” and “leave only footprints.”